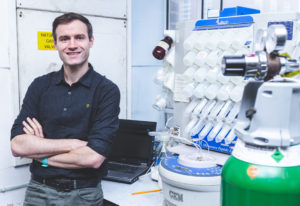 Stephen Cochrane originally hails from the village of Eglinton and attended Eglinton Primary School and Limavady Grammar School before starting an MSc degree in Chemistry at Queen's University Belfast in 2006. Outside of his studies he slapped bass in a prog rock band (Citizen Snips) and partly funded his studies through summer jobs in a local abattoir. In 2010 Stephen graduated top of his year and moved to Edmonton, Canada to undertake a PhD in Organic Chemistry at the University of Alberta under the supervision of Prof John Vederas. His research focused on structural and mechanistic studies on antimicrobial lipopeptides, namely the tridecaptins, which show strong activity against multidrug resistant Gram-negative bacteria. In 2016 he was awarded a Sir Henry Wellcome Postdoctoral Fellowship to study the transport of lipid-linked carbohydrates across bacterial cell membranes at Oxford University with Professor Benjamin Davis. During this time he also worked on the synthesis of new tunicamycin analogues with reduced cytotoxicity. In 2017 Stephen was appointed as a Lecturer in Organic Chemistry at Queen's University Belfast, where his research focuses on the identification of novel antimicrobial compounds and targets.

Outside of work Stephen is kept busy by his family (wife + 2 kids). His main hobby is long-distance running, with his currents PBs at 16:03 (5k unofficial), 34:01 (10 k), 1.15:11 (HM) and 2:39:07 (marathon). He also loves reading fantasy and sci-fi series, with some of his favourite authors being Brandon Sanderson and Robert Jordan. Curriculum Vitae